Kaingo & Mwamba Camps were built by Derek Shenton, son of a game warden, and are both situated in the northern end of South Luangwa National.

The main camp, Kaingo, is situated in a grove of trees overlooking the Luangwa River. This well-established, 5 room, brick and thatch camp opens each dry-season from May to October.

There is a central, open lounge, bar and library, near an open-air fireplace and a breakfast and tea shelter that is built overlooking the Luangwa River. Each of the five chalets is tucked in the surrounding bush, with its own views over the river. Each has spacious rooms with large fly-proof windows allowing plenty of breeze and its own en suite shower and washroom, as well as an open-air bathtub and a veranda overlooking the river. 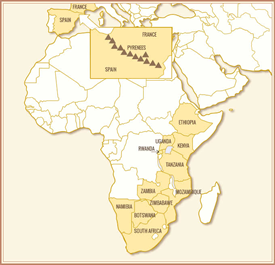